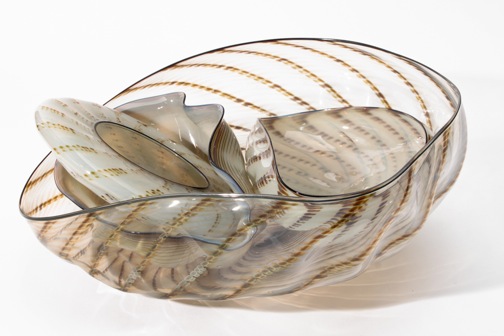 “The ‘Seaforms’ seemed to come about by accident, as much of my work does- by chance. We were experimenting with some ribbed molds when I was doing the Basket series.  In exploring ways to make the pieces thinner and stronger, I tried blowing the pieces into ribbed molds to give them additional strength, like corrugated cardboard. The Baskets started looking like sea forms, so I changed the name of the series to ’Seaforms,’ which suited me just fine. Using human breath, centrifugal force,gravity and fire, ‘Celadon Seaform Set with Gold Stripes’ was created in 1981with my team at my hotshop in Seattle, Washington”.

In 1968, after receiving a Fulbright Fellowship, he went to work at the Venini glass factory in Venice. There he observed the team approach to blowing glass, which is critical to the way he works today. In 1971, Chihuly cofounded Pilchuck Glass School in Washington State. With this international glass center, Chihuly has led the avant-garde in the development of glass as a fine art. His work is included in more than 200 museum collections worldwide. He has been the recipient of many awards, including twelve honorary doctorates and two fellowships from the National Endowment for the Arts.